SO, YOU THINK YOU KNOW NINJA?  THINK AGAIN

CLAD IN ALL BLACK with an air of mystery about them, ninjas are a global phenomenon. Much of their popular appeal has a lot to do with their depiction in movies as possessing super-human powers. They seem to appear out of nowhere and take down multiple enemies with the toss of a shuriken, then incapacitate the enemy’s boss using karate and a sword. They’re not aliens from outer space, nor have they been poisoned by a strange spider; they are regular humans, and that means anybody can become one with proper training. Their appeal may have something to do with that as well. In fact, ninja techniques are spelled out in a 400-year-old document called the Ninja Book of Art ( 忍術書), but the ninjas depicted in those pages are nothing like the ones we know as ninjas today. 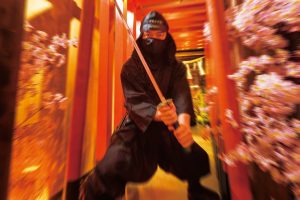 Ninjas dressed like regular folks, like merchants or priests, to collect information without arousing suspicion by the enemy. Some ninjas settled into enemy territory and lived as farmers. They wore dark outfits for night-time operations, but at the time of escape, they tossed out their dark outfit to reveal regular garb underneath.

The ninjas’ original role was to penetrate enemy residences and castles, and collect information. They had to return alive and relay the information they collected. They couldn’t be detected by their enemies. If they were, they were not to fight but flee. They carried a shuriken or two on them as a last resort, but they rarely used them. Ninjas are often seen wielding swords in movies, but in reality, swords would have gotten in the way of their mission, so they didn’t carry them around.

NINJAS CANNOT USE NINPO OR DO SPECIAL TRICKS

Ninjas were said to be able to perform ninpo or special tricks, such as walk on water, fly, or disappear in a flash. Of course, none of this was true. Then why has it become such a pervasive part of the ninja legend? It is believed to be a fabrication the ninja themselves spread to undermine the enemy’s sense of defense. The ninja’s real mission was in wreaking psychological havoc. Much of what’s mentioned in the Ninja Book of Art today would be considered psy-ops. Furthermore, most of what’s not mentioned in the book but passed on orally were ways to survive in any environment. Along with those skills, ninjas underwent physical training so that they could run all day, carry heavy loads, climb walls with bare hands and jump off of high places. Mental training was just as important. They were required to have the mental toughness to withstand heat, cold, an empty stomach, pain and duress for long stretches.

NINJAS ARE NOT SAMURAI

The origin of ninjas date back to around the latter-half of the 1300s. They were allowed to own land and were originally a band of civilians who large-land owners hired to train farmers so that they could protect their farmland and crops. Eventually, samurai grew in numbers and force, and land ownership would be taken away from the ninjas by regional samurai leaders called daimyo. In order to survive, the civilian band took on sabotage work that samurai, who were official frontline warriors in the event of a war, didn’t do, namely, penetrating enemy territory, collecting information, arson and assassinations. This was the start of the ninja as we think of them today. Unlike the samurai, who pledged life-long allegiance to one master, ninjas were mercenaries who switched allegiances according to who paid them. That’s why they couldn’t be considered samurai.

THE REAL NINJAS were not the flamboyant heroes they are portrayed to be. Actual ninjas made sure they came home no matter what with the information they were sent out to collect, and they were never to boast regardless of how amazing their work was. The Japanese character for ninja means “one who lays his sword upon his soul.” That was how tough a ninja’s spirit had to be, and perhaps, that is the real definition of a true hero. 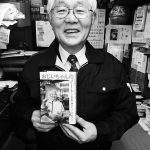 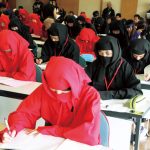