The family car started spreading throughout Japan in the second half of the 1960s. Automakers produced sedans with single camshaft engines that would accommodate a family. Higher-performing cars with twin cams were the rage, but they had more power than most people needed.

In the 1970s, twin-cam sportscars like the Nissan GT-R and the Toyota 2000GT started to appear in the marketplace, but they were expensive and out of reach for most drivers.

The Corona Mark II 1900GS split the difference. It had the form of a two-door coupe, but four seats to accommodate a family. The engine displacement and horsepower was inferior to those sportier GT-Rs and 2000GTs, but the price was within reach. The Corona Mark II proved very popular.

In today’s Japan, the car culture has embraced the idea of faithfully restoring these old gems and getting them back on the road. The 1900GS is making a comeback more than 50 years after its birth.

The car featured here has eight-spoke Watanabe wheels, but the rest is all original. The 1900cc, 140 horsepower twin-cam engine is in excellent condition. Start it up, and the car sounds like it’s ready for anything. The body lines are from a time before computers when everything was hand-drawn. The four headlights on the front give it the feel of a sportscar. It’s on sale in Japan for about $23,000. 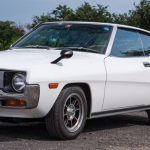