Tosenkyo is a ravine in Ibusuki City, about an hour’s drive from Kagoshima City. It is known for the pure spring water that rushes through the canyon at the rate of about 100,000 tons a day. City-run outdoor restaurants use this pure water to serve a rare dish called “somen nagashi.”

Somen is a noodle dish specific to Japan made from wheat kneaded with oil and then dried. A summer dish, the noodles are usually boiled, served in a bowl as is, and dipped in sauce. But at Tosenkyo, natural spring water swirls endlessly though a circular water pathway of somen nagashi machines where the noodles are released. This is the only place in the country where you will see big crowds gathering outdoors around a noodle machine.
Incidentally, the water in these machines flows to the left for the mostly right-handed Japanese population. But some machines are set to flow to the right for the left-handed customers, so do not fret if you are a leftie. 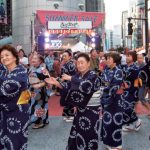 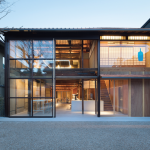