An awe-inspiring Noh production took place earlier this fall at Fushimi Inari-taisha, a shrine in Kyoto. The play was performed at dusk in the hopes that it would heighten the audience’s awareness in all five senses. The theme was “see the invisible.”

The troupe wanted to attract a new generation of Noh fans, so it chose the temple as an attractive place to broadcast the performance via Instagram.

“I couldn’t take my eyes off of the graceful flowing of the actors,” said one audience member. “It was a beautiful performance.”

“It’s rare to see Noh and be able to take photographs,” said another. “There aren’t a lot of actors, so if you go with previous knowledge of the story, it would be even more entertaining.”

“The way their costumes sparkled in the twilight was beautiful,” said another.

And finally, one audience member proclaimed, “This tradition is crazy!”

This “see the invisible” project revived the tradition of performing Noh outside on temple or shrine grounds, giving the performance a more relaxed air and injecting Noh with some needed interest so that the art form will thrive in the future.

Tatsunori Kongo, the man behind the performance and a skilled Noh actor, said the group’s aim is to perform Noh every Friday at twilight at a Kyoto temple or shrine. For more information, check out seetheinvisible.jp. 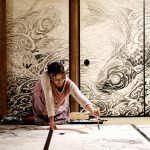 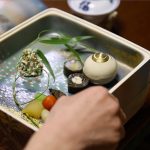