These days, everybody knows sushi, sukiyaki and tempura, but anko is still relatively unknown. Like sushi and tempura, anko is part of Japan’s culinary tradition, and a type of confectionery made from beans. It appears as black paste, wherein lies its first obstacle to its global appeal (“Ew, black beans in a dessert? Not appetizing.”). And, there are so few Western recipes that call for sugary sweet beans (“Sweet beans!? Ew!”). People used to write off anko before even trying it, but in recent years, its subtle flavor has been winning more fans and its popularity has grown.

Anko is made from azuki — small red beans grown in tropical regions of Asia. Since the olden days in China, azuki beans were revered as the yang that could contain life’s misfortunes, or yin. That belief, along with its methods of cultivation, made their way into Japan around the 10th century B.C. Since then, azuki beans have been added into rice to dye it red or boiled with a little salt and added to a dish as part of a ritual to promote health or ward off bad spirits. To this day, “osekihan” (red rice) is often served to celebrate auspicious occasions, like the birth of a child or being accepted into school. At the time, sweetness was derived in limited quantities only from a plant called amazura, and therefore was merely available to the powerful and the noble. But in the 18th century, mass production of sugar cane would make sweetness available to the public, paving the way for the birth of anko, which was sugar added to boiled azuki beans.

To make anko, sugar is added after the beans are boiled, then mashed into a paste. Because it’s such a simple recipe, Japanese confectioners found creative ways to differentiate their sweets from others. They experimented with texture, sweetness, and aroma of the beans, while also playing around with new combinations, like as topping for fruits or shaved ice, or more recently, served with pancakes or custard cream. The experimentation continues.

A colleague of mine who happened to pass by peered at the title of this piece and said in jest, “Is anko that black thing in the center of taiyaki? Gross.” I pity him. 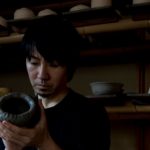 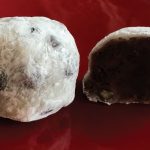 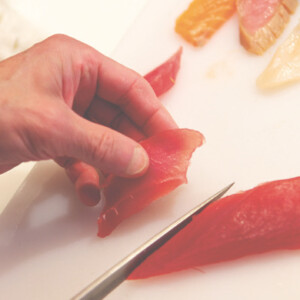