Japan’s economy is on a path to recovery. The state of emergency was entirely lifted in Japan on May 30. Businesses in Tokyo and Osaka metropolitan areas resumed operations and shops reopened after closing for nearly two months. On the first weekend following the end of the state of emergency, a rejoiced crowd went out to town.

More than 700 people queued up at the Nihombashi Mitsukoshi Main Store before opening. Tiffany & Co. at Tamagawa Takashimaya Store limited the number of customers in a store at once, which resulted in many patrons waiting outside.

Each store carefully managed the customer flow to ensure social distancing. The preventative measures such as wearing face coverings, and installing an infrared thermography and hand sanitizing stations at the entrances were implemented.

Online shopping was a norm during the state of emergency, but it did not satisfy a craving for shopping for many consumers. People headed out to enjoy in-person shopping and to vent out their frustration.

Some news reports praised Japanese people’s behavior while shopping. They maintained the adequate distance between themselves at stores and on the trains, and wore face coverings as required. Others pointed out there could be a resurgence of coronavirus infections if they lowered their guard too soon.

Earlier this week, the governor of Tokyo issued a COVID-19 alert and advised the citizens to remain cautious, given the increased number of new cases after the weekend. 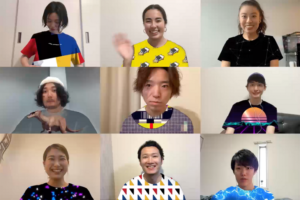