The cuisine of Peru is a blend of foodstuffs from the nation’s various ecosystems. Restaurants in this western South American country regularly place in lists of the World’s 50 Best Restaurants, and in 2019, two Peru restaurants made it into the top 10 of one of those lists.

One restaurant in Peru is, MAIDO, which focuses on Nikkei cuisine. “Nikkei” is a term used for Japanese immigrants or descendants of immigrants. In Peru, it refers to Japanese immigrants who came to Peru after 1899 and it also signifies a unique cuisine that blends Japanese and Peruvian culinary styles in a way found in no other Nikkei community. MAIDO serves cuisine that the Nikkei community has developed over the years, fusing their diet with the treasure trove of ingredients found in Peru.

Because washoku, the traditional culinary culture of the Japanese, was registered on the Unesco Intangible Culture heritage list, there’s been a Japanese food boom around the world. However, Peru’s Nikkei cuisine is a different category, having evolved over the years and become a well-established part of Peru’s overall culinary culture. In fact, it has helped fuel a Peruvian gastronomic boom.

Many countries accepted Japanese emigrants, but none of them has established Nikkei cuisine as part of their own traditional food culture except Peru. This is because there was a high affinity between Peruvian and Japanese food cultures to begin with. For example, both countries eat raw fish and seaweed, a rarity around the world. 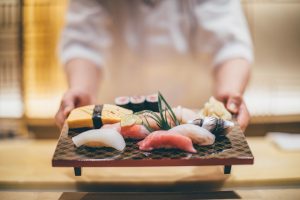