Gekikara (extra spicy) ramen is trending in Japan these days. The term “gekikara” means “fiercely spicy” in Japanese. You’ll see the term on all sorts of products in Japan. There are gekikara snacks, pastries, onigiri rice balls, noodles, and bentos lined up in supermarkets and convenience stores. Ramen, udon, burger, beef bowl, and conveyor-belt sushi restaurants are lacing their menus with fiery gekikara items. Several restaurants have added menu items that they claim are “the spiciest in history.”

The long-established izakaya Tsubohachi added to its menu this spring the “hot pepper stir-fry from hell.” The item comes with a warning about the extreme spiciness. The stir-fry is full of hot peppers, Sichuan peppers, and chicken. Inspired by a Sichuan dish called laziji, Tsubohachi’s version is so spicy, it hurts.

Even McDonald’s is getting into the gekikara fad. The vividly red, extra spicy McNuggets were a big hit last year. This June, when the spicy McNuggets returned to the menu, the fast-food chain released its hottest-ever sauce, the Mega-Kara Spicy Sauce. The sauce is based on its original Gekikara Spicy Sauce, but with double the amount of habanero, ghost, and jalapeño peppers.

Not to be outdone, Pizza Hut began offering its Chotto Gekikara-peño pizza, which it calls “the spiciest in Pizza Hut history.” This new pizza is based on the Hut’s Mexican Kara- peño pizza but with triple the jalapeños and extra chili sauce to take the spiciness and umami to the Nth degree. This ridiculously hot, green-colored pizza posted much better sales than the chain expected.

This boom seems out of place with the Japanese penchant for more subtle cuisine. Did the Japanese have a secret love of extra-hot food that somehow was overlooked by Japan watchers until now? The answer is, “No.”

History books show the red pepper was introduced to Japan from China in the 17th century and was used as an herb to warm up the body. It later spread through Japan as seasoning. But even then, red peppers were relegated to a minor role in cooking, maybe to add an accent, but never to mask the true taste of the fish and vegetables.

Japanese people rarely even ate meat until the Meiji Era, which began in 1868, and they didn’t use all the spices associated with meat dishes throughout the rest of Asia and around the world.

Today, Japan’s diet is more diversified, and people are used to spicy food. Japan has had gekikara fads in the past, but this one is different because it is widespread among women and young adults.

Part of the trend is because of the rise of social media. People share their spicy dishes on Instagram and Twitter, bragging about how hot their meal was.

But the king of the current gekikara boom has to be Mouko Tanmen Nakamoto, a popular, if small, ramen chain. It has 22 stores around the greater Tokyo region, but Nakamoto’s gekikara ramen is famous throughout the country.

Your fearless Origami editor recently visited Nakamoto to see what all the buzz is about.

From afar, you can see Nakamoto’s bright red storefront, reminiscent of red peppers. The store’s menu comes with a spiciness grade from 0 to 10. I decided on the signature dish, Mouko Tanmen, ramen in a miso-based soup cooked with vegetables and a decent amount of sliced garlic. The ramen is topped with extra hot mapo tofu, a Sichuan-style dish of minced beef and tofu with a lot of red peppers. Those peppers are what brings the fire to the meal. The umami from the sweetness of the cooked vegetables and the miso balances well with the spiciness. As I continued eating, I started to sweat all over. And this is just their signatutre dish! Their spiciest dish is called Hokkyoku (Arctic) Ramen, which comes with a warning. I couldn’t bear to try it, but I hear it is excruciatingly hot.

Nakamoto also serves mildly spicy Miso Tanmen and the non-spicy Shio (Salt) Tanmen. The family-friendly restaurant makes sure there is something for everyone to eat. In fact, that’s the key to Nakamoto’s success. Its dishes aren’t only spicy; they are delicious. You can even find Nakamoto’s instant ramen on sale at 7-Eleven convenience stores. It is one of the most popular instant-noodle packages.

The fact that Nakamoto and others in the gekikara boom make sure to add umami to the spicy dishes may just be the secret to this boom’s sustained success. It’s not only about fire; taste matters too. 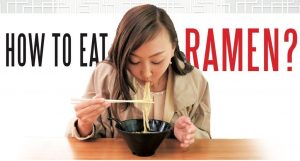